05/11/2016 3151 views
KACE Product Support Scripting Software Systems Management Supporting Windows
When attempting to run an uploaded executable via script in the K1000, the KBox throws an error.
I'm attempting to launch an executable just to gain familiarity with the process.  However, this setup (which should only upload a single self-contained executable, then run it) fails with the error "Creating process returned non-zero:  C:\ProgramData\Dell\KACE\kbots_cache\packages\kbots\124\WinSCP.exe : (267) The directory name is invalid."
I 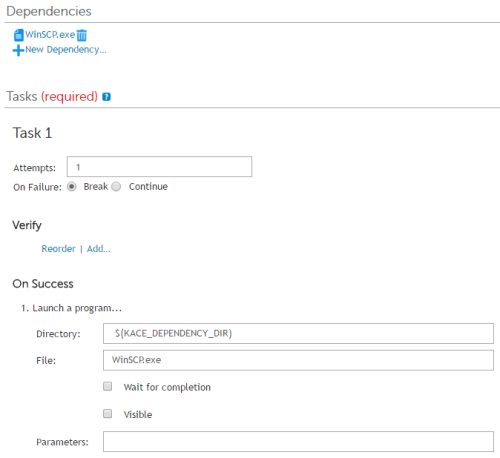 I have confirmed, however, that the C:\ProgramData\Dell\KACE\kbots_cache\packages\kbots\124\ does exist and that it was created by this script.  Attempting to run it later (after the folder has already been created) makes no difference.  Creating a new script with the same settings results in a new folder being created (C:\ProgramData\Dell\KACE\kbots_cache\packages\kbots\125\), but the same error.  Manually copying the executable (WinSCP.exe) to that folder on the target machine and running it also results in the same error.
Any ideas?
0 Comments   [ + ] Show comments

Please log in to answer
1
FYI - we actually discovered, after some further troubleshooting, that DFS had not replicated the file to the local repository due to errors we were encountering with DFS.  Once that was resolved, the script ran as expected.
Answered 05/11/2016 by:

1
George, I think it's probably sub-optimal to choose a user ID which contains your email address in a public forum.
Answered 05/13/2016 by: