06/01/2015 3455 views
KACE Product Support
I've been working with this off/on for the past two months (with Dell & Lenovo PC's) and tried every combination/variable I know and it still doesn't work like the instructions say. We want to use the Asset Tag or Serial number of the PC in the Name but I still can't get the Serial number (Lenovo PC's) or the Asset Tag (Dell PC's) to come up in the PC name when using the 'Variable Replacement'.  I can get the desired text portion to work but the variable portion is always random digits.  I've run this without the Pre-Install task (GetComputerName) and get the same results.

If I run with Pre_installation & Mid-leval task I get just the Desired Text that was input in the command line.  The log file shows the 'Get computer name' getting the Asset tag of Dell PC but the Computer Name is Blank.  Therefore the computer name is Desired Text (UMASS-) only.
Pre-installation tasks: #1 item is Get computer name (GetComputerName_x64.exe)
Mid-Leval tasks: After apply UEFI pratitions - Set Computer Name (setcomputername_x64.exe /name:UMASS-$Asset /log) - the $Asset variable is replaced with $Serial for non Dell machines).

If I run just the 'SetComputerName' as a Post-Install task with the Desired text and Variable I get the same Desired Text only that was input in the command line (UMASS-) .
Even tried zipping the Setcomputername executable but no change.

What Am I missing here. 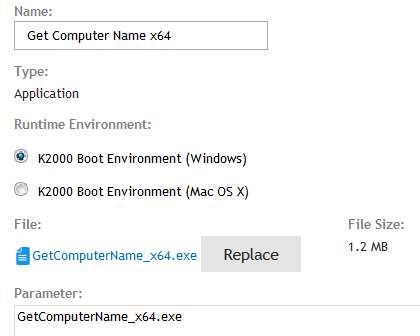 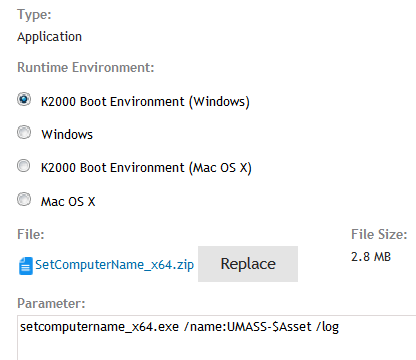 Are you using the latest Get/Set computer name version 1.5.0.1, can be downloaded from the support portal and this may resolve the issue.  Its possible to also run the task with the /debug mode so it can pop-up a window letting you know what it finds for the information. The routine pulls the information from WMIC data, so you can always verify with a command line to WIMIC to obtain the data and see what its showing. They should match.