I'm attempting to use an existing boot environment and scripted installation to deploy some new Lenovo laptops (450/450s/460s) we've purchased. However, when attempting to connect to the boot environment, the machine fails to determine the server IP address from DHCP. After attempting to use the hardcoded fallback address and mounting the KBOX install shares, Error 1231 occurs (The network location cannot be reached)
ERROR: Unable to mount KBOX share at \\(hardcode IP)\peinst
I had thought that it may be an issue with Ethernet drivers, but I installed windows and downloaded drivers on a machine, and then placed them into KACE using Driver Feed Builder.
It doesn't seem like this corrected the issue.
I believe I've seen somewhere that doing this doesn't load the drivers into existing boot environments. I attempted to create a new one, but I still receive the same error.
Any help would be appreciated.
Asked 4 years ago 6501 views
KACE Product Support Systems Deployment Supporting Windows KACE Boot Environment (KBE) PXE boot PXE
0 Comments   [ + ] Show comments

Please log in to answer
Posted by: SMal.tmcc 4 years ago

Test it from the boot menu, if it works.  From the k2 menu make it default in settings so then it will be the default pxe choice

Comments:
Posted by: SMal.tmcc 4 years ago

or use the link on your k2 tools page

the KBEM will create KBE's with a built in utility that tells you what the name of the directory that the driver feed will be looking for if enabled. 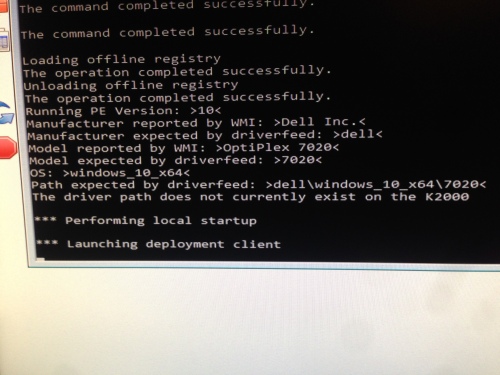