Does anyone know why this happens? My unattend.xml set UAC to disabled.

Note, this is the built in K2000 'Restore UAC' task that runs at the end of the task sequence. See error below. 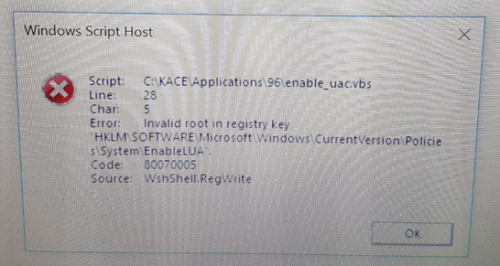 Using the 'Continue on Errors'  option but still requires input to reboot. It does not occur if there are no tasks applied so I guess it only activates this task if a task sequence is applied? I have tested recapturing, using a new unattend file and same issue.

Has anybody seen this?

Please log in to answer
Posted by: Channeler 2 years ago

Endorsed by Nick The Ninja

The enable_UAC.vbs is a built in task for the SDA appliance, it really isn't enabling the UAC but restoring it to the state before starting the post install tasks.
Do you have any anti-virus installed on your image or as post install task?

Something could be preventing the KBE from reaching that Registry Value.

Now, you said your answer file is set to Disable UAC, right?

What is the UAC status on the Image itself?

If it's OFF, try to turn it ON, the answer file will shut it down anyways.

Comments:
Posted by: maherfed 2 years ago

0
Eventually got 'fixed' with this. Figured out a workaround rather. The error wasn't really causing any issues with the machine more just frustrating on my part that the image wouldn't run smoothly. 1703 &1709 the exact same domain join task and task sequence was fine, but 1803 would not work (This actually makes sense as there are domain policies that make it difficult to access the registry once on the domain, but my curiosity was why did 1703 & 1709 work just fine?) Tried using a different unattend file, rebuilt image from scratch, tried enabling UAC then disabling using the unattend file, force-closing the wscript error with task kill - all to no avail.
However, discussed with a colleague and got an idea.. Removed the Domain Join task from the task sequence. Instead, copied the PS1 script locally as a post task. As part of this post task, I exported/imported a registry key pointing the locally copied script with the command to launch the PS1 script using the RunOnce Reg Key. This meant the 'Restore UAC.vbs' no longer failed, and the machine joined the domain on the next boot. So far it has been working great.
If it you can't fix it, workaround it :)
For anyone who wants it:
Content of Reg Key:
[HKEY_LOCAL_MACHINE\SOFTWARE\Microsoft\Windows\CurrentVersion\RunOnce]"JoinDomain"="powershell -noprofile -command \"&{ start-process powershell -ArgumentList '-ExecutionPolicy Unrestricted -noprofile -file C:\\Users\\Administrator\\Documents\\JoinDomain.ps1' -verb RunAs}\""
New Post task was a zip with bat file, ps1 file and above reg key
COPY /Y "JoinDomain.ps1" C:\Users\Administrator\DocumentsREGEDIT /S DomainRunOnce.reg
First boot after Kace finishes, the unit joins the domain and reboots. My first time figuring out and using the RunOnce key so this should be helpful in the future.
Comments:
Answer this question