I am attempting to create a Golden Image and would like to apply the patches we have on our K2000 instead of from Windows.  This would be more realistic in testing patches as it would simulate the Patching process to client machines.

I am looking for a way, if possible, to do this.

After some time on itninja, i realized i was asking the Question incorrectly lol.  What  I was trying to do was implement the patches from the Kbox into the actual win7sp1 media that we use for scripted deployments and basically keeping it updated for quicker deployments and kimage builds. Instead of having to do 100+ patches every time i update our departmental images because I would be coming from my vanilla win7 image. We have about 15 departmental unique kimages, which I'd like to keep up to date.  Still working on setting up detect and deploy patches.

Just trying to save some time and appreciate the comments and help.

Please log in to answer
1
Hello,
You can download the patches needed from the Microsoft site and then create Post-Installation actions (one action for every patch) to deploy them in your image deploy task..
Kind regards,
Marco - StockTrader
Answered 12/11/2014 by:

1
If you have not tried the 3rd Party Tool WSUSoffline to install patches then this is the most expedient method I know. WSUSOffline's latest version is 9.5 available on their website. Simply download and extract the tool, run the UpdateGenerator.exe then select a group of patches to download by OS. and save them to your k2000
Tasks to download and install patches be sure to select copy updates to USB Medium and place them in your \\k2000\petemp\wsusoffline\wn7 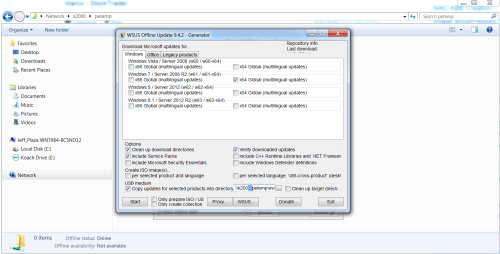 Next you will need to create a Post Installation (PO) task to run their Windows command script to update located under client which calls start DoUpdate.cmd %*
This process will patch everything in the folder in a single pass.
Answered 12/11/2014 by: