I am working on an application(a very old one :)) which runs word 2000 templates for printing. There are 1000s of templates so converting them to the Office 2007(the preferred version which part of the base build) is not an option right now.

As of now, I am trying to virtualise the application (which is working fine after a lot of trouble) along with Word 2000 for the printing function which uses the word 2000 templates. This functionality of printing using word 2000 is failing.

I have tried a single APPV package with Word 2000 sp3 and the application together. Also tried separate package and used DSC. But every time I am getting the same error. 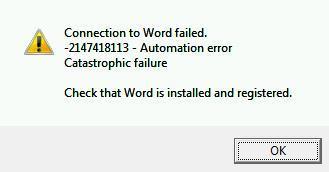 Used procmon and found out that its trying to run winword.exe /automation and failing in Windows 7 sp1

I am using APPV sequencer 4.6sp2, sequencing in WinXP Sp3 and also tried in Win7sp1 and the using Q:\MSO2K as the folder for word 2000.

The same package is working in Windows XP Sp3 Environment but I need to make it work on Win7 Sp1.

Any help would be really appreciated.

Please log in to answer
Posted by: imavanura 9 years ago

Ninja since: 11 years ago