I have seen this issue before, I have talked to other packagers who have sequenced 'loads of apps' a rather vague description for quantity, but when you push them for a more specific figure, it turns out they have not really done that many applications.

I was glad, kind of to see this problem pop up again. When I talk to people about it they think I am a little bit crazy.

What should have been a nice easy day, 3 apps completed, now I have to assist with SAP GUI. I have done this a few times, it’s a bit of a pain, but I am getting used to it now, so, what’s the drama?? 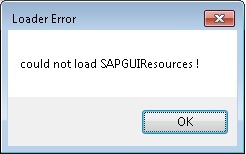 I had a little look and a play. Turns out this has been 'packaged' (sequenced, App-V 4.6) a few times.

It has been done to the VFS and the Mount (different packaging attempts), diff issues arose, then re-sequenced on different machines, now there is a bit of confusion as to what the latest version is. Was it sequenced on a proper build, did it have office blah blah

So, well after lunch and more like dinner time, its sleeves up to look at SAP GUI.

Far too confusing to figure out how it was done and not a lot of clear info coming in, so, start from scratch, I hate doing that, but sometimes, it just has to be done.

When I saw the 2nd error (could not load SAPGUlResources!), because you know, there are 3 or 4 different versions of the package and they are all on different machines, also all the machines have different levels of software, excellent. Sorry, the error....

It dawns on me, hang one, it’s not the H:\ or the INI, the app can’t actually find what it needs (something familiar here).
Do me favour, look in the virtual registry... wait, go to the sequencer, edit the package, we are looking at now with that error, go to the registry tab and look for 'seque' (I didn’t fancy doing the old, create an instance of the CMD from the virtual app, then use Regedit (that would prompt for UAC, then not show the virtual keys... blah blah)

Don’t forget to add the ticks in the boxes so you are actually looking for something..

Ah yes, nice and early, a CLSID, to do with SAP

and there, the InprocSvr is pointing to the location of the files where they are stored during the sequencing

After a training session, working on site to assist with knowledge transfer, one guy had the issue noted above, I had seen this quite a bit over the last few months, I had been lucky, I normally just edited a few registry keys and all was good. This poor guy had hundreds, but bless him he stuck with it and changed them all (in the sequencer... patience of a saint). 3 days later someone else had the same issue, in about 20 keys, there was a bit of friction there.

So back to SAP GUI, we tried registering some of the DLLs. That was not too successful.
So, I pull rank on the whole using the mount idea...

It’s time to sequence this properly, on a clean machine, luckily I do remote packaging, the fact that I drive 100kms to go onsite to package remotely is beside the point. (Resolved now, they have a cloud based file sharing solution, a proper one too.)

Re-sequence the application on my machine using the VFS NOT the mount. All good. Get that app tested and moved into Production. Oh, does anybody remember the first issue, well, that was an because of an old OSD script that had NEVER worked in 3 years, so we fixed that too.

Then, because I like you guys, I thought I would test it out at home (since I have a bit of time on my hands, looking for work if you need a packager...). So re-sequenced on the same machine this time using the mount (not the VFS). Bingo, same error, with the weird registry paths.

Also for a laugh, I tried copying the files over, this involved creating the equivalent directory physically on the App-V Client.

This involved copying the 231 files over, launch the virtual app, it all works sweet as a sweet thing. Pretty much as you would expect.

So is my solution to fix the one sequenced to the mount and then do an OSD script to copy the files over??? Not really needed, since we have it sequenced properly using the VFS. Next on the list Business Explorer.

If you read this far……. Thank you for your attention

I would be interested to know if anyone else has seen this problem. It looks like it might be to do with the Mount or VFS, I tend to use the VFS more. But every now and then an application fails, so I do some testing, then re-sequence it to the mount and it works, then for a few weeks I will use the mount for apps.

Ninja since: 14 years ago