By default, PowerShell will not run script files. This is considered a security feature to help one from accidentally running a PowerShell script.

The error will look something like:  “File <path>\<file> cannot be loaded because the execution of scripts is disabled on this system. Please see “get-help about_signing” for more details.”

First, to change the policy you must have rights to do so. Right click on the PowerShell shortcut and choose “Run As Administrator”. Then, you’ll be able to change the script execution policy directly by typing:

If you skipped the part about ensuring the console is run as administrator, you’ll be stopped here with a security failure with the message, “Set-ExecutionPolicy : Access to the registry key 'HKEY_LOCAL_MACHINE\SOFTWARE\Microsoft\PowerShell\1\ShellIds\Microsoft.PowerShell' is denied.”

If you are using the Admin Script Editor, it actually provides an option in its program settings to change the PowerShell script execution policy. Just click on Tools, choose “Options” and navigate to Script > Security. 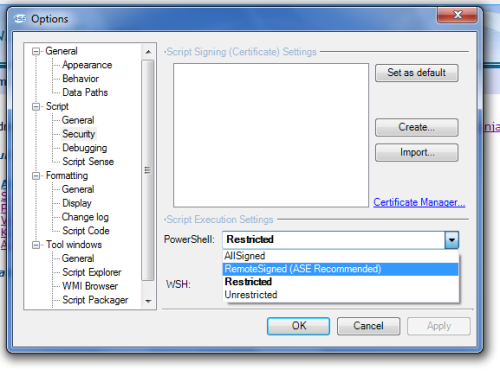