I had been troubleshooting in a previous thread but the topic changed quickly and I want to keep it on point, if I can. This is an automated deployment project I'm working on that involves installing Dell Command|Configure on a machine that does not have it installed, and, creating an image that installs the same software as a mid-level task.

Here's what I have:
1. A script that installs Dell Command|Configure to a target PC that does NOT have it installed.
2. A bat that calls cctk.exe with params and flips the boot order to NIC boot
3. Restart the machine
4. Initiate automated deployment and apply a fresh image.

I duplicated these tasks and then set them as K2000 Boot Environment (Windows) for use as mid-level tasks and they fail. This could be as simple as trying to install C|C as a mid-level task fails, rendering the other two tasks failure as well, but I can't figure out for the life of me what I'm doing wrong.

When I run the same tasks locally on my desktop, it works fine, but I'm thinking perhaps one of two things is going on:
1. I simply can't install this application as a mid-level task.
2. The argument to install this as a mid-level task is not as simple as copying my post-install tasks and simply calling it a mid-level task. Maybe I have to call a directory that I'm as of yet unfamiliar with. I know a little about Kace directories from working with the scripts such as $(Kace_Install), for example, but if that's the case, I'm not sure how to call it properly on a mid-level task.

Please log in to answer
Posted by: SMal.tmcc 4 years ago

the best solution is to add the C|C to your KBE boot.  download and install the KBEM on your tech station

also install the C|C to this same tech station.  that way you can call it from the PE x: drive during pre or as mid level tasks 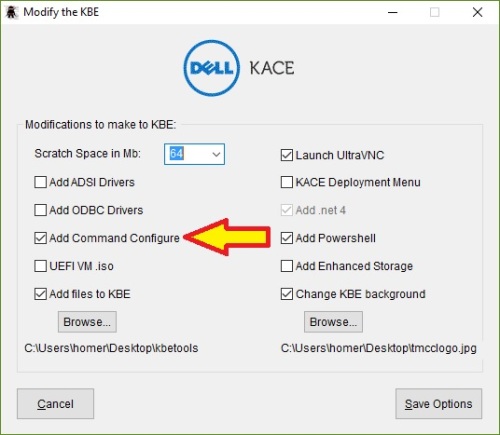