I am doing some testing with both Automated Deployments, and the Get/Set Computer name options in Kace.

So I tried to do an AD with an image that has Get/Set as Pre and Mid level tasks. The target PC is right next to me, so it failed on image, because it couldn't set a name.

But in a scenario such as I'm sitting on the beach and get a call that a machine is compromised and I need to reimage it, how can I configure an Automated Deployment that does one of two things:

1. Gets the existing PC name, reimages it, and applies the same name back on? (Useful for redeploying the same machine and role.)
or
2. Allows me to only set the name and have it apply during the image process? (Useful for simply refreshing an image and giving a name.)

Additionally, if an AD requires booting to the NIC, how can I set a target computer which otherwise boots from the HDD to boot from the NIC this one time?

Answer Chosen by the Author

the get set computer name task will take care of the naming.  Create a pre-install app task with the GetComputerName_x64.exe and for parameter call

and it will collect the name

and it will prompt for the name to be input.

create a set mid level task to apply either one using

if you have a k1000 you can use it to push out a script to use the Command Configure to change the bios boot order to PXE first and reboot.  The machine will boot to the k2, image and as mid task use the CC to change thje boot order back
Answered 03/14/2016 by:

Please log in to answer
0
the command line pdf can be found here:
http://www.dell.com/support/home/us/en/04/product-support/product/dell-cmnd-config-v3.1/manuals

here is my k1 script to set pxe to boot 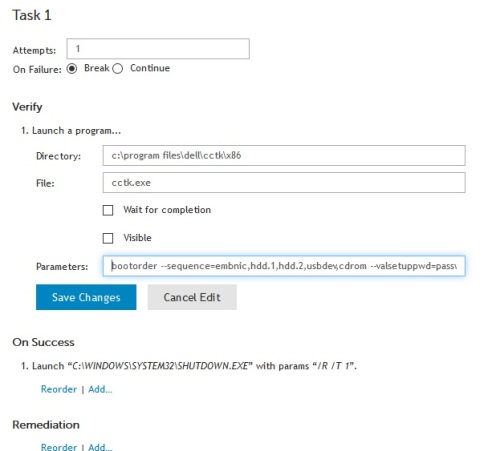 then as a mid task you call the cctk.exe and change the boot order back to hdd first