I let a few servers install the latest round of MS patches via the K1000. This includes 2008 x86, 2008 R2 x64 and 2012 R2 x64. I noticed this morning that on each of these machines there were services that wouldn't start due to logon failure. I noticed that each service that was affected runs as an NT Service. I first picked up on this when SQL Server services wouldn't start. 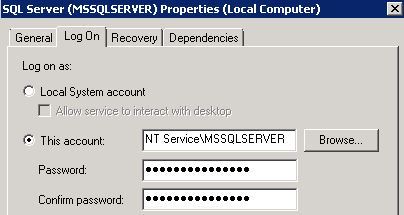 I found that changing the service to logon as local system, apply, then back to NT Service, I get a confirmation that NT Service has been "approved to run as a local system service" (I don't have the exact wording).
[EDIT] Exact wording of the confirmation is...
The account [username] has been granted the Log On As A Service right.
After this, all services and dependent services seem to run without issue.
A few other services were setup similarly and the same workaround worked.
I know KB3097877 from bulletin MS15-115 caused some other kinds of havoc last week. I did find this patch had been installed. I removed it, rebooted, and tested but it seemed to have no effect. KB3101746 was also part of that same bulletin but removing that didn't change anything either. I've done the same with the other installed patches to no avail.
Any other brave souls install the latest patches on their servers? Any issues similar to this? I would be interested to know how things went for you.
Thanks!
Asked 5 years ago 1780 views
Systems Management Supporting Windows K1000 Patching Patching Patches and Updates
0 Comments   [ + ] Show comments