We are building our gold MAC OS image and now have a base OS image in KACE 2000.  I created a new deployment job with our gold OS image and software packages to be deployed.  The OS seems to deploy perfectly but upon reboot the software packages seem to fail.  As you see in the photo the computer reboots after step 8 to initially boot in to the OS.  It takes a while for the OS to boot and steps 9 - 13 fail (the unit is not on the network at this point as it is still booting).  By time step 14 comes executes, the OS is up and running.
These packages were exported from the K1000 and imported in the K2000.  They can deploy from the K1 with no issue.
Also, what folder do the DMG's get extracted to on a temporary basis.  I know in Windows the K2000 temporarily puts everything in c:\kace
What are we doing wrong?  I don't even get a nice interface like we do with Windows. 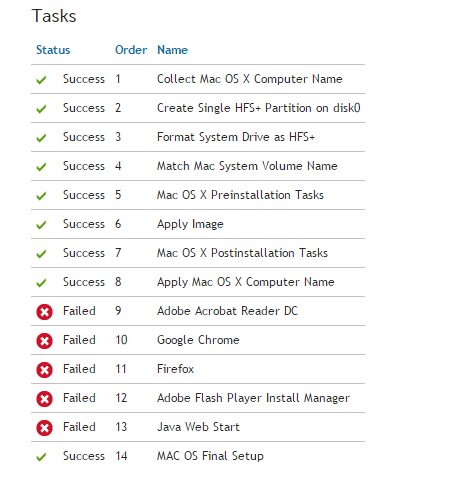 Ninja since: 5 years ago