Hello guys, I have been trying to make this script run for quite a few hours now and at this point, and after googling and browsing ITninja, I am still a little lost.
Here is a screenshot of the script 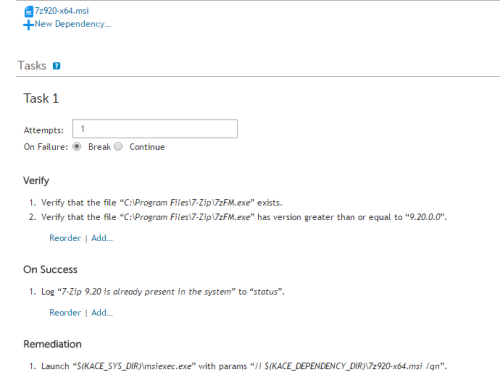 As you can see this is a pretty simple script that only checks for the software/version not to be present on the pc and in case it is not it runs an msi from the dependencies folder on that pc.
I have isolated the problem to the point where I am almost sure the file is not being copied to the dependencies folder of the pc.
To give more information about this, the targeted pc has a label which points to a replication point and that replication point works ok for managed installations.
A part from this question I have another one, are replication points used to copy dependencies? or is the file always copied from the appliance?
PD: I know this can be done with a managed installation and actually I have one already in place but I have still decided to use scripting for single time installations due to the ammount of technicians using our K1000 server.
Any input will be greatly appreciated.
Asked 5 years ago 2703 views
Kace K1000 Management Appliance Software Deployment KACE Product Support Scripting Software Kace Supporting Windows Windows Installer (MSI)
8 Comments   [ + ] Show comments

Please log in to answer
Posted by: Glaporte 5 years ago

In the end I had worked it around ziping the MSI. I noticed MSI files didn't copy for whatever reason but zip files do, so I'm copying the zip file as a dependency, have the script unzip it, run it, log a message and then delete the dependency folder. That works kinda like a MI but has the benefits of the Run Now from scripts.
Answer this question