02/26/2015 5386 views
Software Deployment KACE Product Support Scripting Systems Management Systems Deployment
I am Totally lost on way i cant send a simple script through the KACE scripting Section.
if i do an Online shell Script and type the code in, It keeps failing saying

The fact that Kace is lacking a 64 bit client drives me crazy. We are forced to create a frankenstein mess.

I have decided that I will run everything through a wrapper. I have a template kscript that has everything set to use a Powershell PSAppDeploy Toolkit zipped package. All I have to do is change the name and upload the Toolkit.zip. The Template has the unzipping, execution and logging already setup. Even if I am making a very small change I still do this to keep everything uniform and ensure I didn't miss anything.

It is pretty simple and I just run a custom command in the managed installed that is wrapper.bat followed by the script ID number of the Kscript. If you KScript is a script ID of 140, the Managed Install command would be:

I have had so many issues spread all over my kbox that have been caused by this. I am still not done correcting everything and converting everything over to these sort of methods. It is a very long a tedious process, but in the end going back and auditing will be a breeze. While auditing mine I found so many hidden issues that I was unaware of that were missed because of this issue. The next time I go back and audit my K1000, everything will be uniform and packaged and used in the exact same way.

There is an issue when you can create a config policy under the scripting section with their Wizard and it is broken on 64 bit machines...

0
General Troubleshooting:
Run script locally and see if it works
In the script check the "Select Specific Operating System" box and select Microsoft Windows
Make sure to run as a user that has the proper rights.
Sometimes "Local System" is not going to work because some scripts need a profile to run.
Attach a screenshot of your Tasks section. It will help narrow down what the issue is.
Answered 02/26/2015 by: 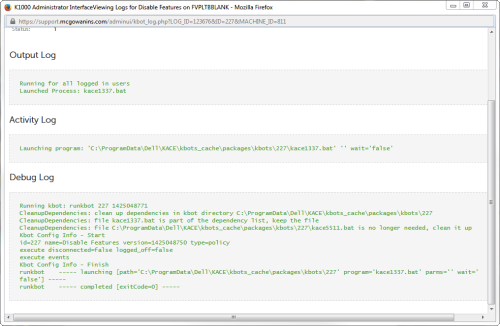 This is exactly what i am putting in the script text in Kace. I know the script works because i use this script on the K2000 as a post install task to disable features when i build new PC's 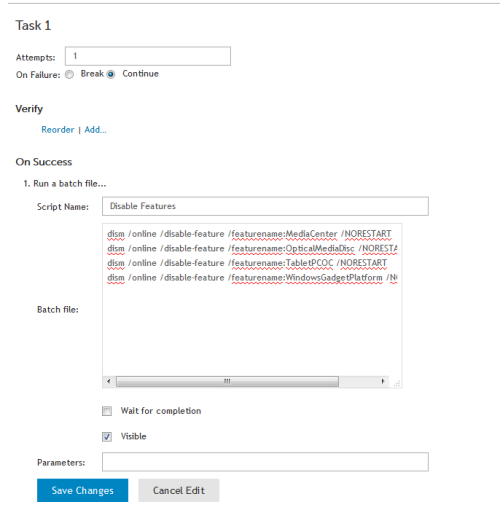 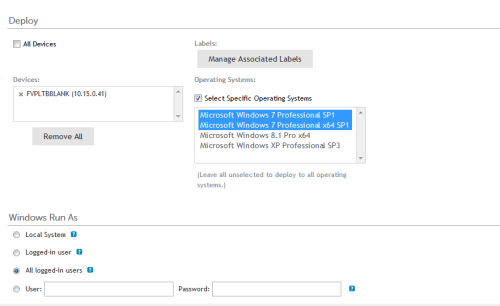 Not sure if there are any steps im missing but this is what ive got. As soon as i save the script it adds a dependency at the top. When i go to the kace Script folder in program data i see the script but when it runs the cmd window pops up and nothing happens.

I have tried to run the script on both Kace script and online shell script. I either get a success with no results or an error 404.