K1000 Patch schedule with reboot set to prompt, but some PC's are rebooted?

12/24/2014 5536 views
Software Deployment Systems Management Supporting Windows
I deployed the current patches to a small group of lab machines and at least one, maybe more was rebooted by the ampagent even though I have it set to prompt in the same schedule we always use with no changes to it. The event log has the data below. I need to deploy to our end users today. Anyone know why the Ampagent would force a reboot like this? Or better yet, is this something that may happen to many more machines?
We're at 6.2 with all fixes. Agents are 6.2.1025. Windows 7 x64bit client.
The process C:\Program Files (x86)\Dell\KACE\AMPAgent.exe (COMPNAME) has initiated the restart of computer COMPNAMEon behalf of user NT AUTHORITY\SYSTEM for the following reason: Legacy API shutdown
Reason Code: 0x80070000
Shutdown Type: restart
Comment:
EDIT: Could this be caused by a machine running low on disk space? I just noticed the first machine that reported this is 96.6% full.
Reboot options are as below. Same settings we always use. 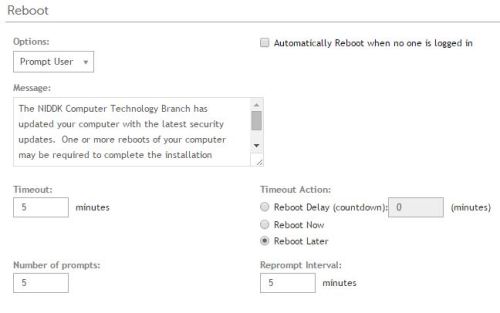 Please log in to answer
0
From what I remember if you have ANY reboot options other than NO REBOOT it will eventually reboot the machine. With the options you have above it will show 5 prompts at 5 minute intervals and then at the last prompt it will reboot.
The way KACE has this set up is as follows...
NO REBOOT = PC will not reboot.
Force Reboot = No prompts, PC just reboots
Prompt User = Prompt shown. Ability to snooze reboot but eventually the PC will reboot.
Answered 12/29/2014 by:

0
Based on what the Help / User Guide says, your machines shouldn't be rebooting with that patch schedule. That said, I'm inclined to agree with h2opolo25 on this. Here is a snapshot of the Help below.
If the reboot was delayed at each prompt then it would've rebooted, based on what I'm reading below. But you said these were lab machines so they would've been left untouched yes?

0
You need to examine one or two of the affected machines with very low available disk space to find out exactly what is eating up disk space.  I have seen a machine with 15Gb of Office service packs repeatedly downloaded because there was an error in the local Office source files preventing the service pack installing correctly.  This was in the %TEMP% folder.  Patch runs frequently fail to delete files, so you need to check both the user and system %TEMP% locations and all the other usual download locations that can fill up.
Answered 12/29/2014 by: