Deploying an image from K2 to a HyperV VM

11/15/2016 1966 views
Kace K2000 Deployment Appliance Software Deployment KACE Product Support Systems Deployment Imaging
Hi all:
Been using the K2000 for about two years and it has been a great tool for deployment on physical machines.  Starting to use more virtualized environments, and I'm having trouble getting any of our images to deploy on a virtual machine (using Hyper V).  VM is set as a "Generation 1" in HyperV, to allow for Legacy booting.
Each time I try, the "apply image" step of the deployment seems to run to completion, but then I get the following errors (attached).
This image was captured from a physical machine, using the KACE instructions for creating a master image, and using the KACE Sysprep tool before capture.  As I mentioned, it deploys without issue to physical hardware.
Is it possible to deploy an image captured from physical hardware to a VM?  Or do I need to start from scratch and create a new image specifically for virtualized use?
Thanks.
Eric 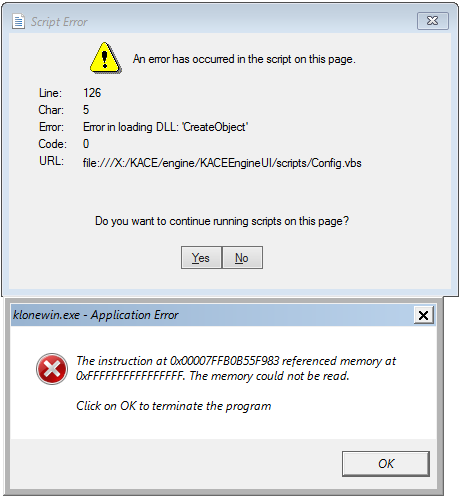 Answer Chosen by the Author

Please log in to answer
1
Answering my own question is odd -- but I was able to find the solution thanks to this thread:
http://www.itninja.com/question/booting-kace-boot-environment-kbe-inside-hyper-v-vm-is-hit-or-miss
In my case, I already had HyperV configured for a single processor; but changing from dynamic RAM to static RAM solved the issue.
Answered 11/15/2016 by: