Can I run a batch file in managed install quietly? 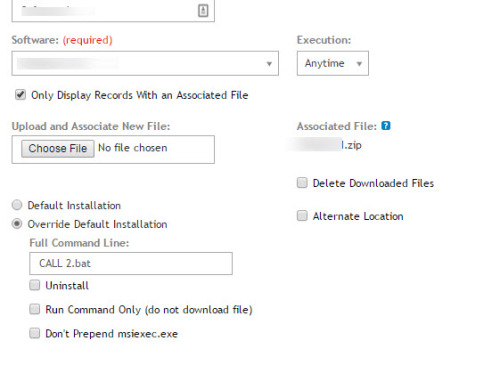 I've uploaded a zip file which includes 2 msi files and one bat file. I'm using Managed installed and calling the bat file as you can see in the screenshot. This works great except the command prompt stays open while it's installing the msi quietly. Is there a way to hide the Command prompt or run in it silently? I don't want users to close this while it's installing because this is an encryption program and both msi files have to install in order.

Please log in to answer
3
It should be silent but there are a couple of problems with your configuration.
It looks like you have a space in the batch file name, is it "call 2.bat" or call2.bat? I would remove the space.
You need to check the box for "Don't Prepend msiexec.exe", otherwise the appliance will actually try running msiexec.exe call2.bat, which won't work.
Answered 11/08/2016 by:

Please log in to answer
1
Thanks for posting your bat that is where the problem lies.

The start command is the culprit.  When you use the start command is spawns a new cmd window, the 2.bat is suppressed from showing by Kace but any spawns are not.  You can try to add the /B switch to see if that works or use /min switch.


If you have a k2000 you can also get the ksleep.exe from and add that to the zip and call that in between the msi's to force a wait without using start /wait