Suppose I want to deploy the latest version of Java (or any other software that supports silent installation). In Inventory=>Software=>Java 8 Update 60 (64-bit), I uploaded the EXE installer, as shown below: 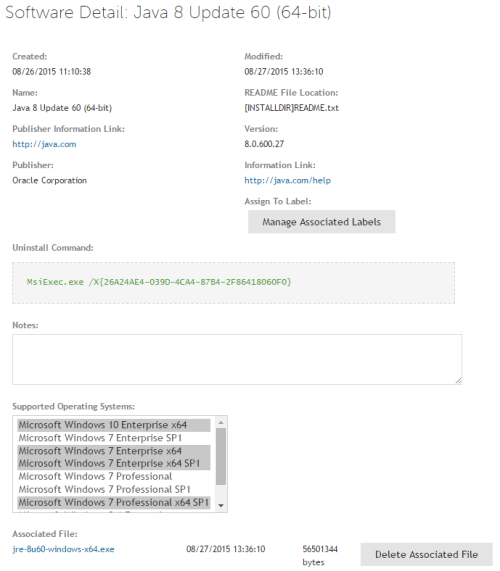 Next I go to Scripting, create a new Script, and setup my Task 1 to something like this: 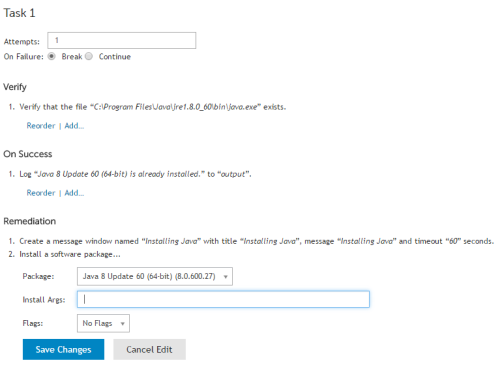 Obviously if I left the Install Args area blank and hit "Run Now" to run the script, it won't be a silent installation and I'll be presented with the full installation wizard.
So then I decided to use the following arguments: INSTALL_SILENT=1 AUTO_UPDATE=0 WEB_ANALYTICS=0 REBOOT=0.

.
Normally I would assume that this field will simply append the args to the installer since the field is simply labeled as "Install Args", so basically {KACE_DOWNLOAD_FOLDER}\jre-8u60-windows-x64.exe  INSTALL_SILENT=1 AUTO_UPDATE=0 WEB_ANALYTICS=0 REBOOT=0. However after I manually run the script, Java didn't get installed and the installer wasn't even launched at all.
I already have script debugging enabled on the workstation, so I took a look at the KAgent log file and I can see why it didn't run:

Saved and ran the script manually hoping it'll install, but it didn't again. I went to check the log again, but it looks like it read and ran correctly:

Still confused, I checked the log and see why the installer would run when the Install Args is blank, and from that I finally know why.

It finally installs correctly.
Now I don't want to always figure out the correct XXXX id path every time I create a new script (C:\ProgramData\Dell\KACE\downloads\XXXX,) and was hoping there would be KACE variable for the "downloads" folder, but unfortunately there is only $(KACE_DEPENDENCY_DIR) variable.
RECOMMENDED FIX
UPDATE:
**SOMETIMES it doesn't work, and only when the script is running as Local System, which is weird that it doesn't work. I tested this further by running cmd session with Local System and a session with a domain user with admin rights and ran kdeploy.exe with the right parameters. Kdeploy.exe completed within a second when running as Local System (no software installed), whereas it took about 20 seconds for domain user (software did get installed properly). Maybe I'll file this as a separate bug report.
0 Comments   [ + ] Show comments

Please log in to answer
1
I got the same problem with other softwares, like WinRar and Google chrome.
This is a Bug or Not?
Answered 06/12/2017 by:

Please log in to answer
0
I just ran this setup with java 8 update 40 with the same switches you ran and got the same results.
I put in to have this submitted as a bug.
WORKAROUND:
I run it as a domain admin (local system doesn't always work right with java for me)
This is how I do my java install from a script:

And I attach the .exe and the .cfg to the script.
ALl the .cfg file is a text file with these contents: