I have been trying to get this figured out for over a week.

I am trying to install AutoCAD Map 3D with the Kace k1000 software distribution but it keeps failing.

First, I opened the AutoCAD configuration tool in order to create a silent install for the package. This made a directory with a shortcut which you double-click on and it installs the software. The shortcut has switches to transform the install.

I tried using the switches as the Full Command Line in Kace but it didn't work. I tried pointing to the shortcut but no luck there either. I have tried opening a command window as system user and running the switches command line from there and it worked but I can't get it through Kace. I know I'm missing something but I can't figure out what. 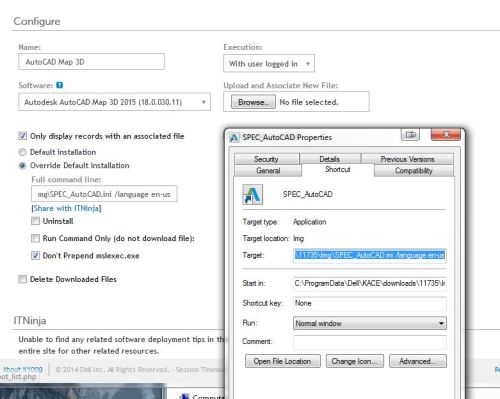 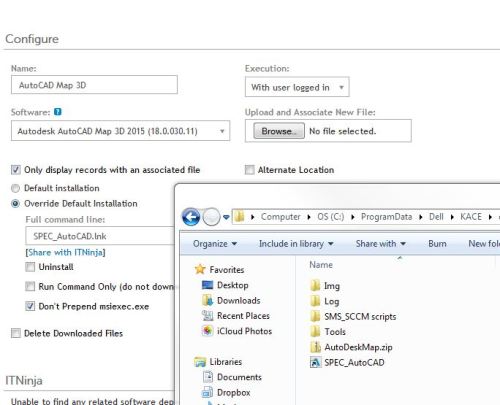 Answer Summary:
Tried another computer and it worked.
Please log in to answer
Posted by: SMal.tmcc 5 years ago

0
I think it is something the admin tool complies into the install.  I cannot move it from the target location to a different location and have it work even without kace being involved.

To trick this to work with your admin tool use the kace path for the install location C:\ProgramData\Dell\KACE\downloads\11735 when you create it.  Zip that up and add  that to the MI instead of what you are using.

Comments:
Posted by: Ballen 5 years ago

0
Well, I decided to push the files and then install manually so I told those software deployments to go to the computers that it needed to go to and it worked.

Kace would not push it to my computer but it worked on all the rest of them that needed it. So, I had it correct but it wouldn't work on mine. I have no idea why but it's working and I'm thankful for that.

Thank you for the idea Smal.