After setting the default extensions and associations, some of these reset afterwards. Most annoyingly .pdf, .html. htm, mailto - all of which were set as a post task using DISM (dism /online /import-DefaultAppAssociations:Test.xml'). Message like: 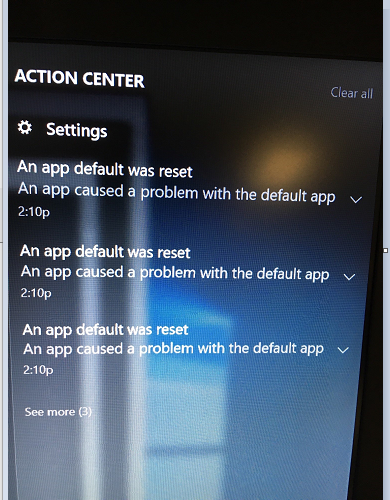 I ran all software tasks, set the defaults I wanted on a test machine and exported the .xml using DISM, then used this  as a post task (after all the software where the defaults are changing are already installed). I get these messages after mid-level reboot (only task here is machine rename) before the post tasks commence. However, after this, the DISM command completes with successful message, but then after waiting a few minutes it changes back to Edge for any local or domain account.

Is there something else I need to do? Reg keys, etc?

Does it matter if you set defaults prior to capture if you set them afterwards?

Please log in to answer
Posted by: andreas.baier 3 years ago

we have the same problem and want to deploy the Windows 10 Enterprise 1709 Branch.

Does anybody have a solution?