08/13/2014 7864 views
Software Deployment Scripting Software Systems Deployment Supporting Windows Miscellaneous
Hi
The last couple of companies I have worked at, I have been the defacto application packager, entirely self taught like most of us probably are.
I have never re-packed software due to numerous issues I read about it etc, so I always use scripts even though the companies have used SCCM 2012. I just like the control that scripts give you. Oh and I prefer MSI files where possible or converting them to MSI etc.
I have only used Batch scripting and that has worked out well for the majority of applications.
I have played with Installshield and Advianced installer etc, but the nature of the economy etc meant that the companies I worked for would not fork out for this type of software.
My question to you is, how do you prefer to package, and what is your choice of software. ie do you use batch files or Vbscript or Powershell etc or other tools like Installshiled.
i am wondering if it is worthwile learning VBScript however everything is going towards powershell.
What would the advantage of me learning VBScript or Powershell for scripting be?
I want to eventually be a full time packager as well so any advice would be greatly appreciated.
Cheers
Arry
1 Comment   [ + ] Show comment

I personally don't use a lot of scripts in packaging, mainly just MSI stuff. There is a lot you can do with an MSI......

I have a vbs that adds and removes entries from a file (like the hosts or services file). Also a vbs that I use to run secedit as a CustomAction in an MSI, I have not used either for a long time.

If you don't know ANY scripting language, and you work mainly in Windows, I would go down the PowerShell route. Happy to hear other peoples arguments on that.

I mention this a lot, but there is a free 'limited version' of AdminStudio for SCCM users. You can capture legacy setups to make MSI, but you can't actually exclude files or reg keys in the IRP or edit the ISM file, (its not really limited, its almost pointless). Almost pointless.... it has saved my bacon a few times. You have to clean up the MSI in Orca. I hope to write a blog soon about getting the most out of the 'limited version'. (Watch this space)

There are some more reasonable tools you can but yourself like the Infopulse PACE.

This content is currently hidden from public view.
Reason: Removed by member request For more information, visit our FAQ's.
1
Hello Arry
Take a look here - www.scriptingframework.net
The manual is in german but the tool is based on PowerShell. It has nice and easy functions and you can use own PowerShell code if you want. Also in the download section you find the free "Scripting Framework Packager". It's like the tool RegShot but with the packager the files are also recorded. Scripting Framework also supports built-in scripts in App-V packages, with the "Scripting Mode". 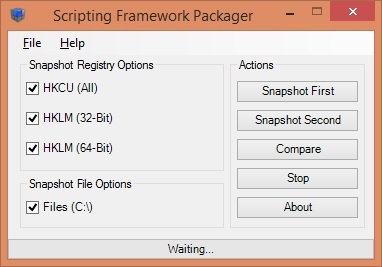 This content is currently hidden from public view.
Reason: Removed by member request For more information, visit our FAQ's.
-1
@Badger,  I am very much interested in App-V... Are there any resources available on internet for learning sequencing. please share
Answered 08/05/2015 by: