*WARNING* Now the definition of this session made me think that it was going to be a session going into how you can secure Windows 8 from threats however, it really was a sales pitch of what feature Windows 8 has added into in for increased security.

Microsoft has made the decision to invest in four core areas:

Presentor spoke to one sepcific Malware Challenges that MS is currently facing is that Malware has the ability to interact with the pc prior to the completion of loading windows. This is one main reasons why MS is putting so much efforts into UEFI. Now its important to understand that UEFI isn't a MS technology rather a industry standard. Key benefits of UEFI that were outlined are:

Microsoft has also made the decision that TPM will be a requiement for all hardware that has the Windows logo by end of year.

The speaker also spoke to the fact that although Windows 7 leveraged ASLR and DEP it wasn't widely leveraged in Windows 7. In Windows 8 however, this is not the case because now its more the standard than that of the exception. Addition Windows 8 help makes it harder than ever to create exploits.

So a review of how this all works now with Windows 8. Basically with the use of UEFI, TPM, Truted Boot, and Measure Boort allows for protection from power up of the hardware.

Now what about sign-in sercurity features in Windows 8.

PIN vs Picture, both very secure but the important thing to remember is that picture passwords are very easily seen by nearby users. 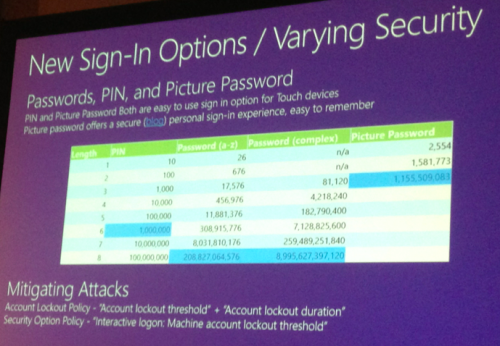 Microsoft feels like they have no need to make any changes to Win8 Firewall because they have kept up throughtout the years with windows firwall needs.

Microsoft 8 is basically putting this on the shoulders of 3rd party vendors as of now. Why? The speaker spoke to it but didn't come right out and say it but, basically they aren't sold off on the fact that Windows 8 is going to be bought into. So they don't want to spend development time on the feature. 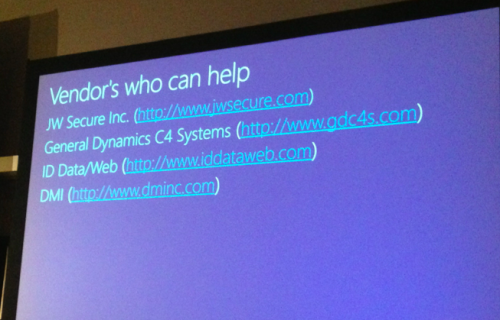 To sum it up, Windows 8 is MS shinning new toy that has all of its new security functionality.